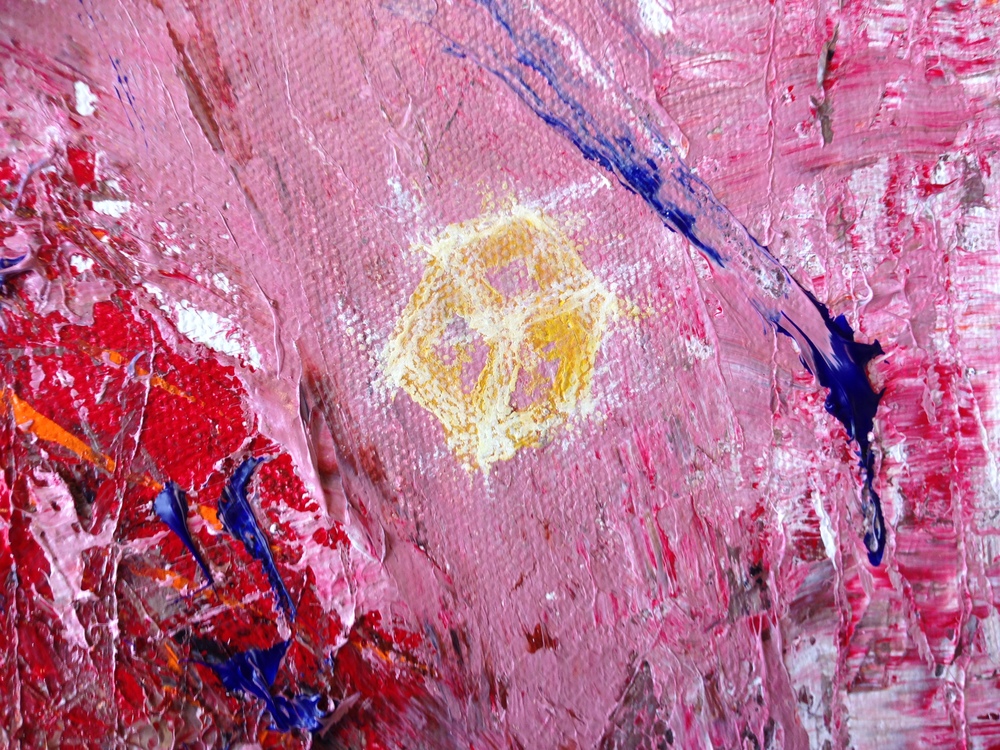 Today, I’ll start by saying that I just came from my first ever abstract art class!  What’s really interesting is that, after 6 hours of abstract painting, my typing skills are completely gone. I have misspelled almost every single word since I sat down. It’s pretty freaky. I wonder if there’s a correlation between the two, in terms of what part of the brain is being used. Just watch wjile if they to tyoe without making corrctions along the way. I cant beileve how mayn mistakes I;m making.

This art class was absolutely amazing. It is taught by a very accomplished painter named Suzanne Metz at the Art Embassy in Leaside. I met Suzanne for the first time when she “crashed” a 40th birthday party I threw for myself called “The Flowerchild Festival”. I liked her from the first time I met her and, over the years, I came to learn what a talented artist she is. When I heard that she was to begin teaching so close to me I could not wait to sign up and was happy to discover that her classes just happened to fall on my “creative day”. Of course!!!

We started the class by selecting an ordinary object to draw. We were encouraged to choose something familiar that we normally wouldn’t pay that much attention to, such as a key or a pair of scissors. I chose my Starbucks cup. At first, I thought that maybe it was too “boring” but I soon understood that this was the whole point of the exercise.

At first, we were asked to draw our objects exactly as we saw them, which is called “realism”. Then, we were told to draw the “stylized’ version which is, essentially, simplifying the object down to its basic “shapes” and assembling them the same way they appear in the realistic version. Lastly, we went on to draw the “abstract” which is taking the shapes and changing them in some way, using the “SCAMPER” method (substitute, combine, adapt, modify, put to other use, eliminate, reverse/rearrange)  To help us appreciate the focus of the exercise, Suzanne read a wonderful quote by Milton Glaser, who is a celebrated graphic artist and well known for his design of the iconic “I “love” New York logo. (I couldn’t remember the quote verbatim so googled him and found this):

When Milton Glaser was sixteen, he decided to draw a portrait of his mother. “I was just sitting in front of her one night and I thought it would be fun to sketch her face,” he says. “So I got out a piece of paper and charcoal pencil. And you know what I realized? I realized I hadn’t the faintest idea what she looked like. Her image had become fixed in my mind at the age of one or two, and it really hadn’t changed since. I was drawing a picture of a woman who no longer existed.”

But as Glaser stared at her face and then compared what he saw to the black marks on the paper, her appearance slowly came into view. He was able to draw her as she was, and not as he expected her to be. “That sketch taught me something interesting about the mind,” he says. “We’re always looking, but we never really see.” Although Glaser had looked at his mother every single day of his life, he didn’t see her until he tried to draw her. “When you draw an object, the mind becomes deeply, intensely attentive,” Glaser says. “And it’s that act of attention that allows you to really grasp something, to become fully conscious of it. That’s what I learned from my mother’s face, that drawing is really a kind of thinking.”

As I was drawing, I was blown away by how true the quote “We’re always looking, but we never really see” became for me. It was as if I had never really “seen “ my Starbucks cup before. It also occurred to me that every step we went through to create our abstract drawings is the same as what our mind does when it is trying to “make sense” of things and adapt them to to fit into our model of the world.  It deletes… it distorts… it generalizes…

It became clear to me that “Abstraction” and the journey of the mind have a lot in common.

Glaser’s quote is also a great example of what I’ve been talking about in terms of how to develop mindfulness practices.  There are so many ways in which we can become mindful, and Art is one which demands that we become deeply connected to the “subject” of our creativity so that we can make a representation of it which reflects it’s truth, as seen through our own lens.

Creativity not only comes from inspiration but also from consciousness. It is through focused consciousness that we learn to let go of our assumptions and associations about what we “think” something is and actually step back, study it from all angles, in different light, under various circumstances and get to know it as it really is. This kind of focused consciousness is not just what we do when we are about to create a representation of something. It is also how we discover who we really are.

I will even go as far as to say that “art” could be considered the process of turning an “object” into a “subject”.

Whoa… that’s an interesting concept…I’ve never actually thought of that before…but with everything I have learned about quantum physics, it makes perfect sense. (With that thought, I decided to google “turning object into subject philosophy” to see if I could find anything to support this notion from a philosophical standpoint. Here is what I found on wikipedia):

A subject is a being who has a unique consciousness and unique experiences, or an entity that has a relationship with another entity that exists outside of itself (called an “object”).[1] A subject is an observer and an object is a thing observed.

Very cool. Isn’t that exactly what Milton Glaser’s personal experience illustrates? I would add to the above wikipedia quote that, as soon as the “object” is observed, it becomes a “subject”… “a being who has a unique consciousness”, etc…

The Glaser quote also supports the point I was making in my “Drama Detox” blog post. Our attachment to a “story” about something or someone is much like the image that Glaser had about his mother from the age of two or three. Our “story”, which is based on a model of the world we formed at a young age, gets stuck in our mind and we keep recycling it, over and over, thus believing it is true, even after it changes, no longer applies to present circumstances or is otherwise extinct. Unfortunately, when there is negative emotion attached to this “story”, it can cause endless, unnecessary suffering.

If I wasn’t already, I am now completely convinced that any kind of Art expression is a wonderful way of learning how to become more mindful and less attached to our “stories”. As we observe and pay closer attention to the details of the “subject”,  we will quickly realize how much we have been overlooking or assuming about the object. Take my Starbucks cup, for instance. Before today, I had no idea that the the sip-hole on the lid was a rectangle. I could not tell you what the shapes on the mermaid’s crown were. I never really noticed that the logo is actually designed as a series of separate white shapes assembled into the image of a mermaid over a green background, rather than just a “drawing” of a mermaid. My Starbucks cup became something much more “real” to me and showed me that it contained a whole world of things that were previously unexplored. And if I was missing so much detail about something so familiar, what else have I been missing?

For some time now, I have begun to notice how many creative and artistic outlets I’m pursuing.  In addition to writing my blog every week, I’ve designed my own website (which is ongoing); I enjoy taking photographs, in general, but lately I’ve been adapting them for other uses, such as making my website more personal, and I also like playing around with them to create artistic versions just for fun; I’ve now made 3 short movies; I’ve started paying closer attention to songs and what makes them appeal to me and I’m singing a lot more, too (either with Choir! Choir! Choir! or with friends or chanting); I’m doing various other artistic projects (with the help of Brené Brown’s e-course); I’m designing a lounge/oasis area on the deck outside my bedroom; I’ve re-designed some of my old jewellery… Until now, I have enjoyed these pursuits for a variety of reasons, but now I realize how much they must be contributing to my overall peace of mind. These practices help me to centre myself by focusing my consciousness on creating something. They bring me more into the present moment and allow me to experience my truest nature.  In truth, it’s another form of meditation.

In my Daring Way™ group yesterday, we were talking about learning how to bring more stillness into our lives and avoid the “pendulum” syndrome, where we go from one extreme to the other. One of the participants, who was having a bit of a challenge understanding what “stillness” feels like, not to mention figuring out how to achieve it,  suddenly realized that she has a regular experience of it when she is figure skating. She described how being on the ice allows her to get into that “zone” and completely tune into herself in that moment.

Whether it is Art…Meditation…Skating…Cycling…Dancing…Sex… we all have things that give us that feeling of connection and centredness. Whatever that is, whether you are good at it or not, DO IT OFTEN.

It doesn’t have to be perfect…it just has to be YOU.

Here’s a photo of today’s painting. (Be kind… it’s my first ever abstract): 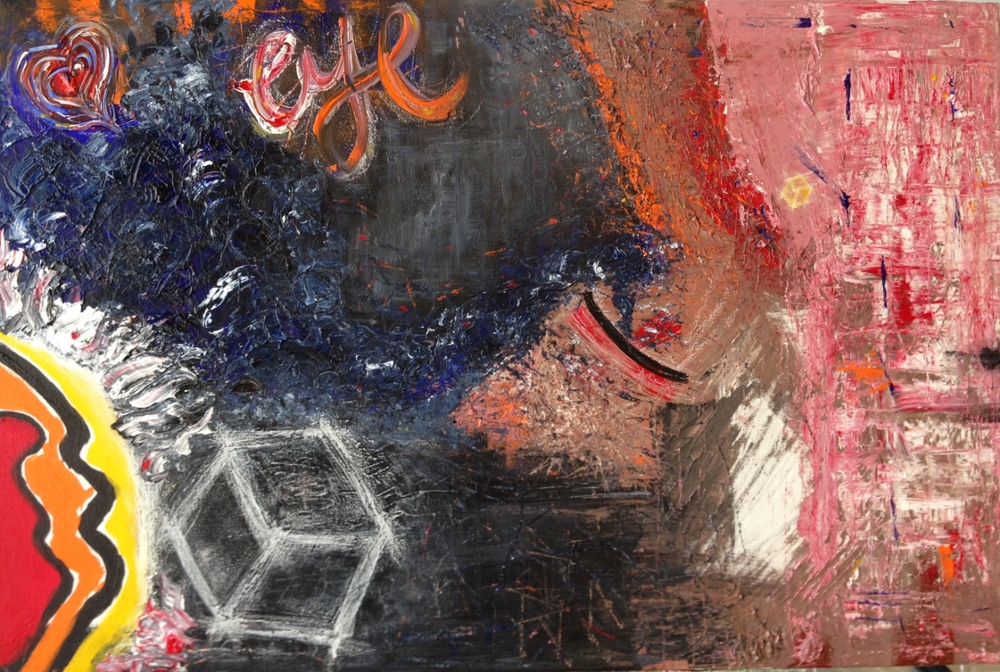