Wow, I think I’ve been really nervous about writing the next part of this story. Not only has it been bringing up a lot of emotion for me but I’m also quite concerned about how to share it in the safest way possible. When I mentioned my trepidation to a friend, she asked if maybe it’s because what I’m writing about is too personal. “Yes”, I replied, “but that’s kind of the point.”

But that doesn’t make it any easier. I guess that’s why I feel the need to preface it by acknowledging my fear and probably why I’ve been procrastinating all day. Now, I have less than 2 hours to bang it out, so here goes…

When we left off, I was in the hospital. I woke up and realized that seven hours had gone by since they told me that I needed a D&C. In my stupor, I asked my husband to find out what was going on. What he discovered was that there had been a shift change in the emergency department during that time and I had simply fallen through the cracks. If I had not woken up and asked my husband to speak to someone, I have no idea how much longer I may have been lying there.

After this point, however, things happened very quickly and instead of having the D&C and then the blood transfusion, as had been originally recommended, they had to do the blood transfusion first. I spent a night in hospital and was then able to return home. Thankfully, I never had any further repercussions from that event and I was told that the cause was likely hormonal/menopausal issues exacerbated by all the stress I had been under.  They recommended bed rest for a few days and to take it easy for several weeks/months until my blood counts were back to normal. As you can imagine, I was extremely grateful to be alive and to my husband, his family and everybody who rallied around to help with the Flowerchild Festival, which took place a few days later… but me being me, I couldn’t help but ask myself why this had happened. If it wasn’t bad enough that I had the shit scared out of me, on top of that, the timing could not have been worse. My illness and the time I had to take off for my recovery basically put the last few nails in Soul Spa’s coffin. It seemed obvious to me that the universe was trying to get my attention about something pretty significant. So, what was it?

I proceeded to analyze the symbolism of the events, as I would with any dream I might have, and it became obvious that my hemorrhage was showing me that I had put myself in a position where I was “bleeding to death”. On a financial level, Soul Spa was bleeding me dry and I didn’t know how to stop it. My default way of coping with it was to do my best to address the issues and stay positive, invest more, try harder, never give up and, most importantly, believe that I could/should shoulder all of the responsibility alone. Underneath all of that, however, was incredible shame.

Once I realized this, I began to see how much pressure my unwillingness to fail had put on me. I mean, I couldn’t blame anyone but myself, could I? I set it up that way. I was the one with the big vision. I had chosen to take all the risk. I ignored the warning signs that I was getting in over my head, thinking that I’d be able to figure it out and emerge victorious and I had made assurances to my husband that it wouldn’t effect our lives. So, when I got into a position that I couldn’t find a way out of, it just made sense that I was the one stuck holding the bag. It was all on me.

But here’s the thing: After a while, I began to think back to the image I had in my head of lying in the hospital, bleeding and forgotten. The more I thought about it, the more upsetting it became. It occurred to me that I had been about as helpless in that moment as I’ve ever been and yet, I still could not rely on anyone other than myself to keep me safe. Not the hospital system, not the doctors or the nurses…not even my husband. I just kept asking myself “How could this have happened? How could I have waited there for seven hours without my husband saying anything? SEVEN HOURS?!? My god, do I have to do EVERYTHING myself?”

Of course, from a rational perspective, I do believe that my husband did everything he felt was possible for me that night but the fact that it happened the way it did served to  wake me up to a much bigger issue and ask the question: “How I could have ended up creating a situation that put me at such risk?”

From then on, everything began to feel unstable. What used to be my accepted reality now felt like an illusion. Even though I had taken charge of pretty much everything in my life, the one area where I felt I could give myself permission to let others take over was if I got sick. But now, I saw that this wasn’t the case and it terrified me. After taking care of everyone and everything for what felt like my whole life, I was faced with the reality that the one person who should be able to take care of me, couldn’t. I had long since accepted that he couldn’t really do it emotionally and now I saw that he might not be able to do it physically, either. That one experience struck me in such a core place that it made me question if I was ever really as safe as I had let myself believe.

By this time, you’ve probably figured out that what I was going through had everything to do with my childhood experience of being over-responsible and yet extremely vulnerable and at risk. It’s because of those unresolved issues that I became the person  who was the go-to for everything. Deep down, I’ve always desperately wanted to feel that there was someone there who could catch me when I fell and yet, somehow, In each of my relationships, when the going got really tough and push came to shove, I was left feeling unsupported and unsafe. Not only that, I also felt that my feelings of being unsupported – rational or not – were completely unvalidated and if I wasn’t “bouncing back” and getting over it fast enough, or asking for more consideration than they felt was warranted, the issue quickly became about them and how their needs weren’t being met. HUH? I spend years bending over backwards supporting you in every way imaginable and when I’m vulnerable and needier than usual you can’t put your shit on the shelf long enough to indulge me? Thinking about it just makes my blood boil. It’s SO fucking unfair.

I admit that my emotional reactions to these times are exaggerated by my childhood history but I wondered if I’ve just chosen men who are pretty selfish in that regard. I mean, why couldn’t they be there for me the way I was for them? I don’t know… maybe I was being too harsh. Maybe my expectations were too high. I looked around at all the men I knew at the time and they all seemed pretty similar. None of them were perfect. Maybe it was just me. Maybe I was being ridiculous. Maybe I should just be happy with what I had and go on as if nothing had happened.

But, it did get me thinking.

And then, I attended my high school reunion…

Until next week… here is today’s painting: 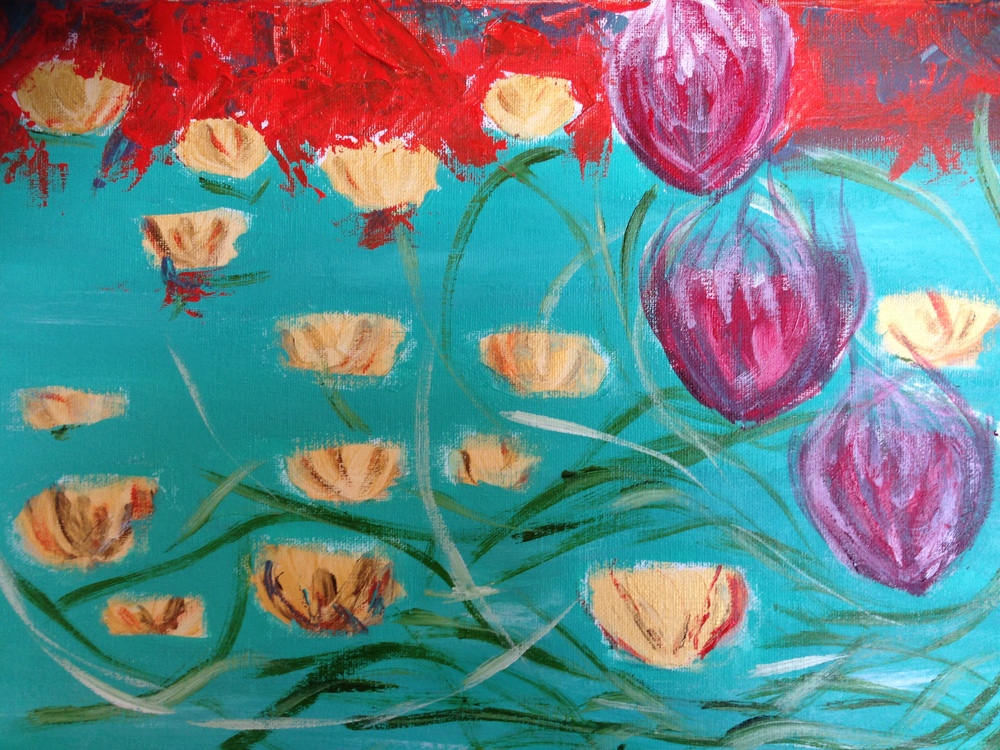