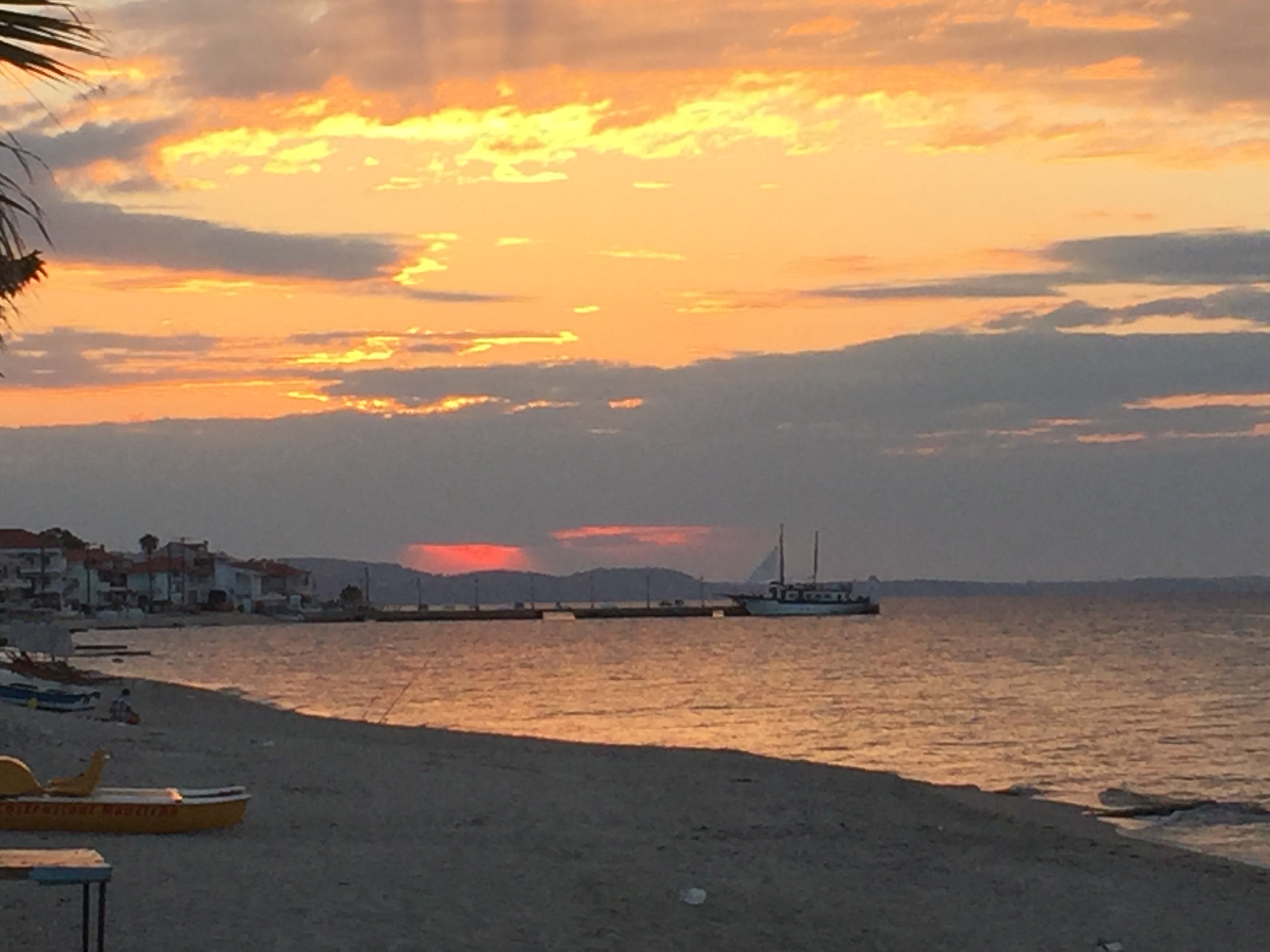 As I write this, I’m sitting in a pristine little café called Paralia (that’s greek for “beach’). It’s situated overlooking the Aegean Sea in a lovely resort town called Pefkohori, (Chalkidiki) which is part of the Region of Central Macedonia in Northern Greece. Chalkidiki is comprised of three peninsulas which resemble three “fingers”, jutting into the northern part of the Aegean Sea.

Pefkohori is a popular summer tourist destination but now, in mid-May, it is the shoulder season where the sun is hot, the breeze is cool, the sea is clear and calm and the beaches are fairly quiet. There are almost no boats to be seen from here to the next peninsula and off in the distance, across the water, I can see Mount Athos, commonly referred to as “The Holy Mountain”.

Mount Athos is part of the easternmost peninsula of Chalkidiki which has been inhabited since ancient times. I didn’t know anything about Mount Athos until I arrived here but, thanks to Wikipedia, here’s what I’ve learned:

Mount Athos is well known for its nearly 1,800-year continuous Christian presence and its long historical monastic traditions, which date back to at least 800 A.D. and the Byzantine era. Today, over 2,000 monks from Greece and many other Eastern Orthodox countries, such as Romania, Moldova, Bulgaria, Serbia andRussia, live an ascetic life in Athos, isolated from the rest of the world. The Athonite monasteries feature a rich collection of well-preserved artifacts, rare books, ancient documents, and artworks of immense historical value.

Today is my second full day here and it already feels like home.

After a long, but remarkably easy, 18 hour travel day, I arrived in Pefkohori. Even though the directions to get here by car were a little vague, I managed to figure it out. My host, Stefania, does not drive so her instructions were as follows:

“There is no address for the house so drive strate to the centre street and after the second bus stop you turn left up to the see then turn right going to Asteri”.

Keep in mind that most signs are in greek and there were no road signs for Pefkohori until I was about 18 km away. Regardless, with a few corrections, I was able to find my way to the town. When I got here, however, with no exact address to go to, I had no idea how I was going to find Stefania. I didn’t know what a local bus stop looked like or what she meant by “the centre street”  but, luckily, the town is small and the “see” (sea) was visible from the road I was on. I turned left at the first road that led to the sea and kept going, hoping to find a sign for something… anything… called “Asteri”. Sure enough, there was a beachside restaurant called Asteria. I assumed, because Stefania told me to go there, that she would be sitting inside or that the staff would know where to find her. I didn’t see her, so I asked if they knew her. “No”, they said. “Who is she?”

I laughed to myself and then decided to have a seat and order a drink until I could figure out how to locate my host.

A few minutes later, I heard my name being called in a high-pitched, greek accent…

I looked up, and there was Stefania, a petite woman in her early 60‘s, arms outstretched, running towards me in her yellow bikini and yelling my name.

We embraced and said our “hellos”, after which, she promptly instructed me to go to my car and change into my bathing suit.

“Today, the sun is out. Tomorrow, we don’t know. Better to take advantage now. We can go to the house later.”

Stefania then rejoined her friend in the water while I sipped my “greek mojito” and soaked up some rays.

I couldn’t think of anything I wanted to do more than what I was doing in that moment.

Eventually, we headed to the house which is about a block or so from the beach. Stefania showed me around, I unpacked and then I headed out to explore and find some dinner. Stefania and her friend stayed behind.

I walked around, got the “lay of the land” and found a little restaurant. I ordered way too much food, drank some horrible wine then headed back to the house, ready for bed.

The next morning, after Stefania acquainted me with every possible feature of her basic little abode, I set out to discover Pefkohori by day.

I walked along the beach road from one end to the other. On one side, it is studded with appealing cafés, apart-hotels and tourist shops. On the other side, there are palm trees, outdoor tables and beach chairs belonging to the cafés with the incredible view of the sea and the mountainous eastern peninsulas.

When I was ready to eat, I settled on a place called Paralia which means “beach” in greek. Themi, the owner, immediately identified me as a “single female traveler” and from the moment I sat and ate my first breakfast of greek salad with hard-boiled egg and a caffe latte, I knew I’d found my “spot”.

As it turns out, my “spot” is actually 3 spots… one is at an inside table where I sit when I’m writing or when I need to charge my phone or laptop; one is at an outside table where we eat and talk when the weather is nice and the other spot is on a lounge chair on the beach.

So… this is where I come every day, pretty much a soon as I wake up, to eat, socialize, take advantage of the free wifi, lie in the sun and, ideally, to write.

It might be useful to know that this trip is arranged in three segments… the first segment is me, alone, in Pefkohori at Stefania’s house for the first eight days. In the second segment, I will meet my friends, Peter and Gail, and we will spend 6 nights traveling in Athens, Mykonos and Santorini. The final segment will take us back to Pefkohori for 6 nights before we do a short, two-day road trip back to Athens, via Meteora. Hopefully, there will be time to write new posts in the two final segments about what we are experiencing on this “Aegean Odyssey”. It will be an adventure, for sure!

Shortly after I wrote the above few paragraphs… a little exercise to get me into a “writing space”… I began to feel quite unwell. My stomach became very upset and I decided to abandon my writing agenda in favour of lying on a beach chair and resting in the sun. Since then, while taking it easy and allowing my body and mind adjust to the pace, the sun and the food, I’ve had an interesting relationship with the idea of whether to actually work on my book while I’m here (as planned) or to just see what comes and enjoy my experience.

Because I haven’t felt up to the mental exertion of writing, (and because I don’t want to be inside writing vs. outside soaking up the sun) I’ve started recording my thoughts in the form of a Video Blog. I had also planned to do some version of a VLOG on this trip, so I figured I’d start experimenting with it while I was just sitting around feeling spaced out 🙂 As it turns out, today is a rainy, windy day so I’m taking the opportunity to edit my videos and finish this post.

As week one is coming to a close

You can see Part 1 of TBR’s Aegean Odyssey, below. This first instalment might be a bit long and draggy for some… I don’t know. Watching myself talk about my experiences for 20 minutes straight seems somewhat self indulgent… VERY different from reading a blog post I’ve written because It’s not as easy to separate myself from the”product”. I sit there thinking…

“Why would anyone want to watch this?”

But, once again, it’s challenging me to go outside my comfort zone and let myself be seen… even if I’m boring and irrelevant 🙂

I’ve managed to set it up so that if I do get any negative feedback, hopefully those of you who are sharing your thoughts will recognize my vulnerability and will, therefore, be extra kind and keep your comments constructive.

I’m having fun making these little videos so I really hope you enjoy them and please let me know your thoughts and how you think they can be improved.

The Things We Hold On To