Home / Tracy's Blog / Process of Illumination / The Paradox of Tracy

I’m not gonna lie… I went down the rabbit hole last week. I had been riding the wave, being “in spirit”, manifesting miracles, sending vulnerable, validating letters and having perspective-altering realizations and then POOF!

Sometime on Thursday afternoon, a fearful thought grabbed hold of me and down I went. I tried everything but nothing could shake it. It made me miserable and discouraged and angry at the universe, as if all the “signs” I had been getting for the past few weeks were just a cruel joke. All I kept saying to myself was “Enough already. I’ve been patient. For Christ’s sake, when is it my turn not to suffer? I’ve been doing so much work on myself and helping so many others in the process that I’m practically a saint in comparison to my old self and most other people on the planet. In fact, there are actually people who tell me I’m a saint. I don’t want to be a saint. Saints get burned at the stake. They become saints because of some huge sacrifice they must make or work that goes unnoticed or misunderstood until long after they are dead. That’s no way to live. I want to be ‘good’ but I want to be ‘real’ and I certainly want to enjoy life’s earthly pleasures along the way. But it seems that the more vulnerable and “real” I try to be, the more I’m seen as “saintly”. But why? I’m not fundamentally different from anybody else. I’m just committed to this process and I feel accountable to the people in my life who depend on me to walk” my “talk”. That’s not saintly. It’s fucking hard work.”

It goes back to what I wrote in a previous post about the occupational hazards of being so committed to personal growth and becoming more evolved, in general. It’s one thing to be a good “model” for others and to help inspire them on their journey but it can also be intimidating for those who are feeling challenged in areas where I seem to be exhibiting a particular strength. It has definitely been a theme in my life and has caused problems more than once in my relationships. It’s times like those when I wish I could just be satisfied with the status quo. Life would be so much simpler if I didn’t always have to “grow” and “evolve”. I want the people I care about to look at me and say “Wow, Tracy seems to have had experiences I can relate to. I feel I can trust her. Maybe there’s something I can take from her example.” But I certainly don’t want them to feel bad about themselves for not being where (they think) I am in comparison to where they are. It’s not a race or a contest. It’s just life.

I suffered in that place for 4-5 days and then I managed to climb out of the rabbit hole.  Apart from the general stuff I’m dealing with emotionally, I think my experience during this period was exacerbated by cosmic influences such as the Sun in Scorpio and the Full Moon in Taurus this past weekend. For instance, I read this on Cafe Astrology:

“The contrast between earthy, practical, peace-loving Taurus and emotional, transformative, crisis-oriented Scorpio comes full bloom today. The Moon in Taurus wants us to find emotional fulfillment through the simple, tangible things in life, while the Scorpio Sun draws our attention to complexities, intangibles, and mysteries. The Full Moon illuminates this conflict between form (Taurus) and transformation (Scorpio), and between collecting (Taurus) and sharing (Scorpio).The guiding principle of Scorpio is “I desire”. Scorpio is the sign of depth, intimacy, and extremes of feeling. Superficiality simply will not do with the Sun in Scorpio. We have the desire to get to the bottom of matters. Mediocrity does not satisfy either. All that is hidden, taboo, secret, or suppressed interests us. In Libra, we strived towards equality and fairness. Scorpio, however, instinctively believes that life simply isn’t fair. Scorpio’s energy is provocative, usually in a quiet way, as well as passionate, strong-willed, and intense. It can be an immensely healing and transformative energy. Jealousy, vindictiveness, beating a dead horse, and manipulative are some of the more negative expressions of Scorpio.”

Oh my god… that is exactly what I was feeling!

So now, here I am at Rooster and the universe, in it’s infinite wisdom has offered me an interesting experience which added some much needed perspective to my whole “saint” issue.

I arrived a little later than I usually do, so all the leather chairs (on which I prefer to sit) were taken but, since nobody else was standing and waiting, I was confident I would get the next one. I decided to go to the washroom before I put my stuff down in case a chair came up in the meantime. While I was doing my “bizness” I made a little wish and I asked the universe to confirm that my wish would come true by making one of the leather chairs come available as soon as I came out.  As I exited the washroom, I saw that the seats were all still taken. I was just about to put my stuff down at the big table when I saw not one, but two chairs become available! I grabbed my stuff and scurried over to nab one. When I got there, a woman, who must have arrived after I did, was negotiating with the people leaving for their seats. I came closer and indicated that I was hoping to sit in one of the seats. The woman was noticeably irritated (yet smiling) and told me she was expecting a friend so she needed both the seats. I stood my ground saying that I arrived first but had gone to the bathroom. She acquiesced but was not happy about it.  In that moment, I felt satisfied that I had “won” but I also felt like such a bitch. Part of me (the “good” part) said that I should have been the bigger person and given her the seat. The spiritual part of me said that another seat would come along shortly after for her (and it did). Still another part of me said that I actually had no right to the seat because she was already negotiating with the previous occupants. And the “judge” in me told me that I was a bitch for having not listened to the other parts. Getting into that little stand-off was quite out of character for me (lately) in terms of actually following through on “taking” the seat. The feelings of wanting to take what I believe I deserve or what I feel “belongs” to me do come up but, in my quest to “do the right thing” and “be the better person” I rarely act on them, especially with strangers (except servers in stores and restaurants…that’s been a lifelong challenge… but that’s another matter). But, in this case, I’ve been feeling such a sense of “damned if I do and damned if I don’t” lately that I needed to “take” this thing that I wanted and felt I deserved. I’m so tired of having unfailing consideration for everyone else’s feelings, being patient and trusting the universe to deliver what I’ve been praying for that, when it seemed to put something I just asked for right in my lap… well… there was no fucking way I was going to let her have it.

I guess the moral to this story is that I’ve had a miraculous reminder of how “unsaintly” I can be and this experience has helped me understand that what it comes down to is whether I can actually “handle” being “real” in real-time. By that I mean, it’s one thing to recount stories of how I got angry or acted like a bitch and what my insights are as a result which makes me appear “saintly”, but it’s another thing entirely to have people witness me being those things as they are happening. That feels like death. That feels like certain abandonment. Here I am, wanting to be “seen” but if anyone were to “see” me behave at my worst, I’m terrified that they’d run for the hills.

I have certainly had evidence of it happening in my life. Even though I have done my best to be as “good”, patient and forgiving as I can possibly be, there always seems to come a time in certain relationships when I find myself under overwhelming stress and feeling vulnerable enough that I’m having trouble managing as usual and so I behave irrationally, immaturely, angrily or selfishly. When this happens, I seem to “fall from grace” and end up being judged and sentenced to exile. Amazingly, all the patience and forgiveness that I have put into practice doesn’t seem to be reciprocated when push comes to shove. I realize that the other people are hurt and angry, too, and I’m talking about things much worse than taking a seat at a coffee shop but I’m not sure why they have such a hard time forgiving me or getting past it when I screw up. They must know my heart is in the right place. They must know I care for them because I never miss an opportunity to demonstrate it, when I can. It’s really hard to be “real” when you end up being judged and ultimately abandoned because of it.

Not sure what else there is to be said about that. It is what it is until it isn’t any more. I just want to have people in my life who can forgive the way I can. Maybe, when I forgive myself, they’ll appear. 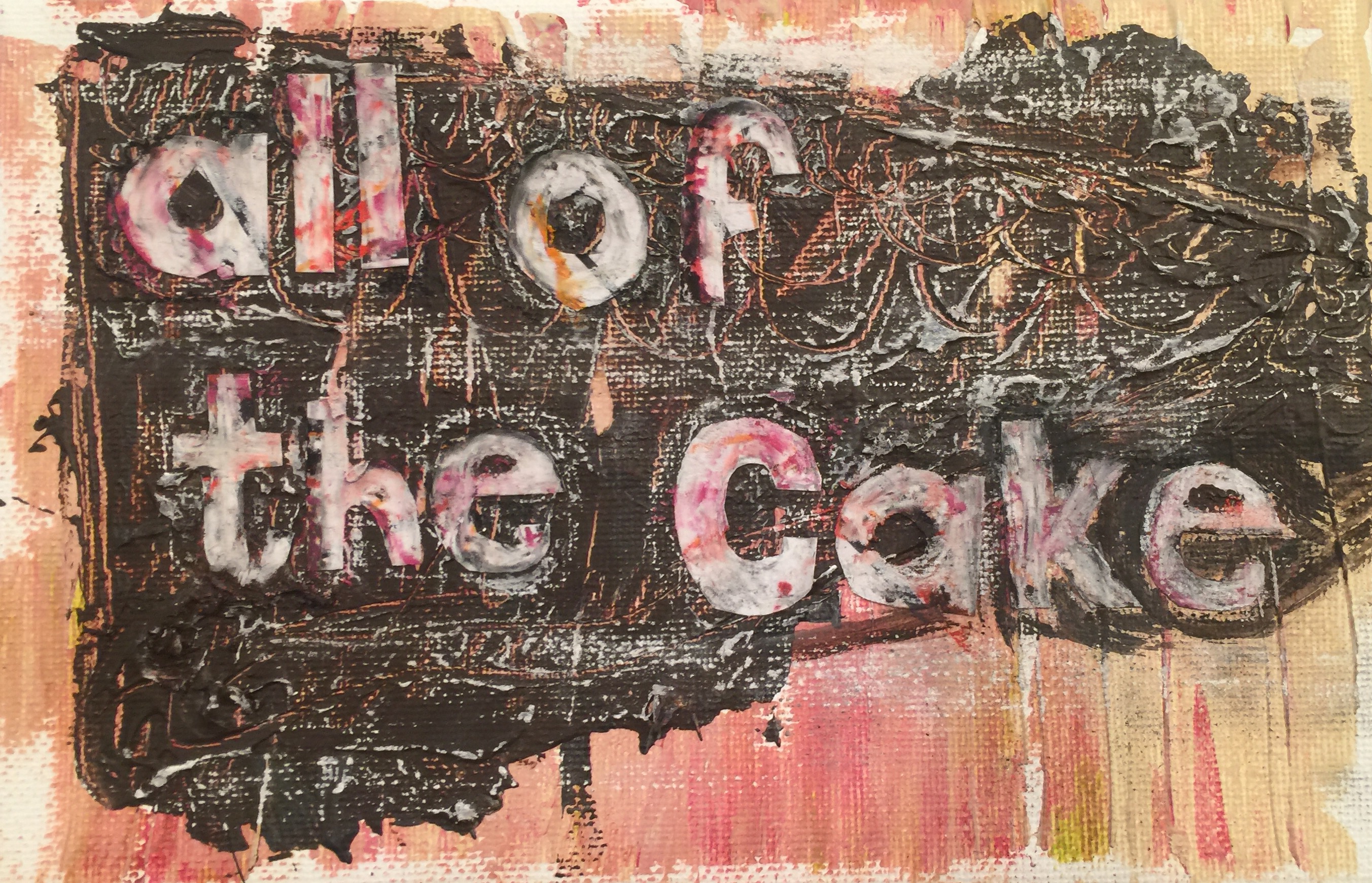 2016: Happily Ever After, featuring “The Self-Love Owner’s ManualTM” or “The Definitive Guide to the “Caring & Feeding” of Tracy B Richards”

“Be”-ing in the Spiritual Bubble